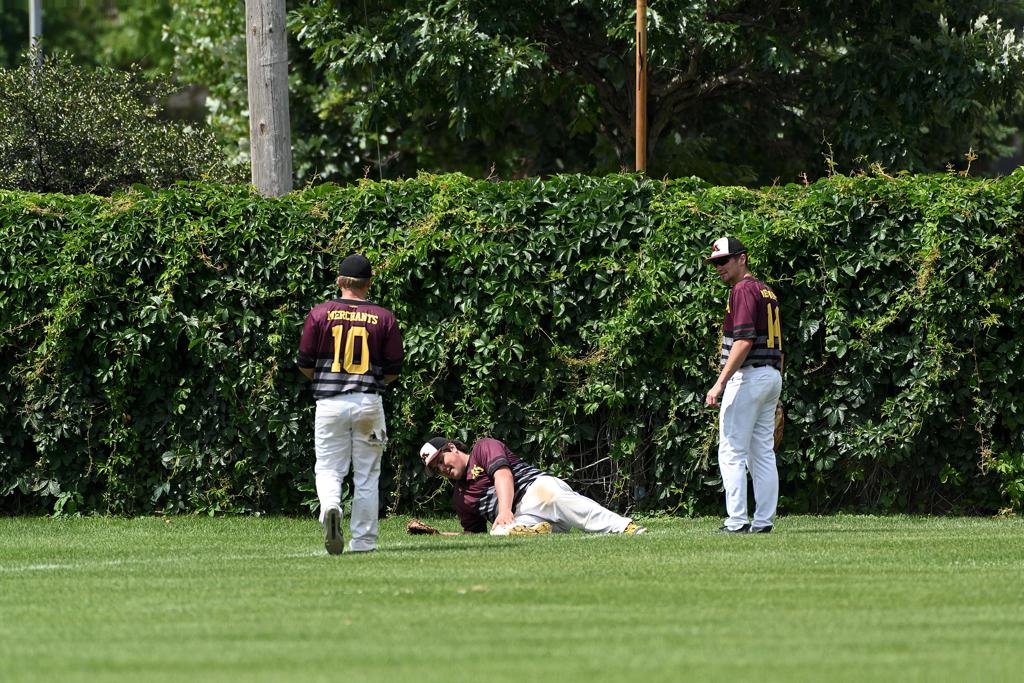 Merchants were swept by the Lyon's Pub over the weekend, ending the best year the team has had in recent memory.

Weekend highlights include the surprise appearance by Dom "The Rocket" Chenois on the mound for game one. Returning from what was once thought as a near career ending, "I'm never going to throw again" type shoulder injury, Dom threw the first 5 innings before immediately donating his left arm to the PNash Hall of Fame exhibits. His recovery time is whenever another arm will grow back.

The Merchants bats went silent, as we were shutout in both games. There were, however, plenty of foul balls hit into the parking lots, so the Pub was lucky we weren't playing cricket or this may have be a different story. All of the runs we saved up have been stashed into a vault, hopefully gaining interest before we cash them in next season.

Highlights from the entire season include:

-Graham swatting a ball out of the air in right field in the season opener, admittedly thinking "what if I drop this" before letting the ball hit the ground.

-Scoring one run in 3 of the first 4 PNash games while managing to go 3-1 in that span, exactly what the season ticket holders want to see.

-Managing to lose three straight one-run PNash games by the way of walk off or extra inning loss, with the entire team questioning whether or not to quit and find a new sport.

-Driving all the way to Cannon Falls to play in the rain to only TIE a team, prompting the quote "A tie is like kissing your sister."

-We went on a four game winning streak, the longest in a few years.

-We entered playoffs as the 6th out of 9 seed. Nice.

All in all, this season has shown a bright future the team has. With double digit wins, a young group of guys (bringing the average age of the team way down (thanks Joe)), the team is in good hands. We had a lot of laughs, plenty of taco bell, a few cramps, enough Advil to gain a sponsorship, and we're still trying to find out what's new, pussycat.

Merchants took on the Rats in round one and came out with a sweep.

Highlights include Cyle attempting to play leapfrog with the other team in an attempt to leap over the batter to reach a ball. Dom managed to catch a ball without cramping, but still leaving heavy doubt in everyones mind on whether the catch would be made with his 49% route efficiency. The team managed to score runs after the fourth inning, which is a feat rarely seen. There was also an incredible rain playlist during the rain delay.

In game 2, Jared pitched 3.2 innings before the torrential downpour caused the field to turn to mud and mush. He then pitched the 1.1 continuous innings the next day, marking the PNash's longest ever outing at 29 hours. That's durability. Graham came in for the last four innings, continuing to set the standard of striking out two, walking three, then striking out another so that all fans get their parking payments worth.

Unlike the Black Plague, these rats couldn't take down the merchants, and we survive to take on the Pub Wednesday night.

Highlights include Dom tracking down a fly ball and ending up on the ground due to cramping not only in one calf, but BOTH calves. How was he running with double calf cramp? Look at him holding his ish tho, dawg, he's putting the team on his back. Lets go inside the mind of Dom Chenois *beyoop* "Dawg I don't know how I'm running right now though, I don't know why we scheduled a double header on a Sunday. I hate baseball, I want a beer."

Graham also put himself in the contention for the furthest bat throw in PNash history with a hammer toss that would've made the Olympic Committee proud.

Fun fact: this game was played in the Sahara Desert. Damn near Tatooine out there, and much like Anakin, our bodies turned to the dark side in the hot sun.... or maybe the red side.

After play had ended for the day, the amount of alcohol that was sweat out was quickly replenished, as burgers and brats were grilled far away from the teenagers who weren't given the opportunity to be effected by our bad influence.

We return Wednesday against the Mudcats.